I tend to think of the paper as a state-of-the-art replication of the great comorbidity paper by Cramer et al. 2010 who investigated the comorbidity of depression and generalized anxiety disorder.

In contrast to Cramer et al. who analyzed data of mostly healthy participants, the new paper estimated the network structure of depression and anxiety symptoms in a large clinical population, using regularized partial correlation networks. They also looked into the change of network structure over the course of an 8-day period. 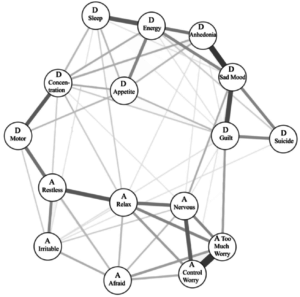 The analyses show that depression and anxiety symptoms form somewhat distinct clusters. You can find the abstract of the paper below, and I am happy to send you the proofs via email (the final PDF is not yet available and I don’t want to publish the proofs here).

Background. Researchers have studied psychological disorders extensively from a common cause perspective, in which symptoms are treated as independent indicators of an underlying disease. In contrast, the causal systems perspective seeks to understand the importance of individual symptoms and symptom-to-symptom relationships. In the current study, we used network analysis to examine the relationships between and among depression and anxiety symptoms from the causal systems perspective.
Method. We utilized data from a large psychiatric sample at admission and discharge from a partial hospital program (N= 1029, mean treatment duration = 8 days). We investigated features of the depression/anxiety network including topology, network centrality, stability of the network at admission and discharge, as well as change in the network over the course of treatment.
Results. Individual symptoms of depression and anxiety were more related to other symptoms within each disorder than to symptoms between disorders. Sad mood and worry were among the most central symptoms in the network. The network structurewas stable both at admission and between admission and discharge, although the overall strength of symptom relationships increased as symptom severity decreased over the course of treatment.
Conclusions. Examining depression and anxiety symptoms as dynamic systems may provide novel insights into the maintenance of these mental health problems.

EDIT: the paper was published a few hours ago and is now available online.