Two new conceptual papers were published recently that tackle the question what network theory and network models can contribute to clinical science. Together, they provide a great introductory read and cover a large number of clinically relevant topics. While many technical papers are available by now, it is good to see clinicians and more applied researchers translate the more statistical concepts of network analysis into the actual clinical world by discussing, for instance, implications for nosology and therapy.

The first paper “A Complex Network Perspective on Clinical Science” appeared in Perspectives on Psychological Science last week. The authors, Hofmann, Curtiss and McNally summarize important conceptual issues of the prior literature. It’s a quite short paper, and a good introductory read, with a strong focus on how mental disorders can arise when problems interact with each other causally due to a phenomenon referred to as critical slowing down. The authors also discuss implications of the growing network literature for diagnostic systems and psychiatric nosology.

Contemporary classification systems for mental disorders assume that abnormal behaviors are expressions of latent disease entities. An alternative to the latent disease model is the complex network approach. Instead of assuming that symptoms arise from an underlying disease entity, the complex network approach holds that disorders exist as systems of interrelated elements of a network. This approach also provides a framework for the understanding of therapeutic change. Depending on the structure of the network, change can occur abruptly once the network reaches a critical threshold (the tipping point). Homogeneous and highly connected networks often recover more slowly from local perturbations when the network approaches the tipping point, potentially making it possible to predict treatment change, relapse, and recovery. In this article, we discuss the complex network approach as an alternative to the latent disease model and its implications for classification, therapy, relapse, and recovery.
— Hofmann, S. G., Curtiss, J., & Mcnally, R. J. (2016). A Complex Network Perspective on Clinical Science. Perspectives on Psychological Science, 11(5), 597–605. http://doi.org/10.1177/1745691616639283

The second paper by McNally is entitled “Can network analysis transform psychopathology?“. McNally explains key concepts of psychopathological network research, and reviews — to my knowledge for the first time — four different types of networks: zero-order correlation networks, partial correlation networks, relative important networks, and Bayesian networks. He also discusses the topic of centrality (which nodes may be more important than others), and concludes with an interesting list of strengths and limitations.

Here an example of a Bayesian network (also called directed acyclic graph) shown in the paper, depicting relations among PTSD symptoms in a sample of adult survivors of the Wenchuan earthquake in China: 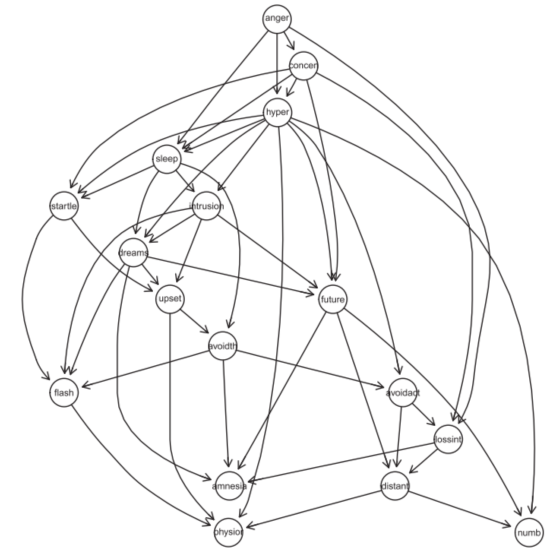 Experimental psychopathology has been the primary path to gaining causal knowledge about variables maintaining mental disorders. Yet a radically different approach to conceptualizing psychopathology promises to advance our understanding, thereby complementing traditional laboratory experiments. In contrast to viewing symptoms as reflective of underlying, latent categories or dimensions, network analysis conceptualizes symptoms as constitutive of mental disorders, not reflective of them. Disorders emerge from the causal interactions among symptoms themselves, and intervening on central symptoms in disorder networks promises to foster rapid recovery. One purpose of this article is to contrast network analysis with traditional approaches, and consider its strengths and limitations. A second purpose is to review novel computational methods that may enable researchers to discern the causal structure of disorders (e.g., Bayesian networks). I close by sketching exciting new developments in methods that have direct implications for treatment.
— McNally, R. J. (2016). Can network analysis transform psychopathology? Behaviour Research and Therapy, 86, 95–104. http://doi.org/10.1016/j.brat.2016.06.006