This guest post was written by Giulio Costantini (costantinigiulio@gmail.com) who recently finished his PhD at the University of Milan Bicocca. His blog describes a new tutorial paper that was just published in Personality and Individual Differences (PDF), and follows his earlier 2015 tutorial paper on estimating psychological networks.

In a recently published paper on Personality and Individual Differences (Costantini et al., 2017), we provide a tutorial in R on new methods for estimating and analyzing personality and psychopathology networks. We focus on datasets that are often collected in psychology, but that are not often used to their full potential: Datasets including multiple groups and datasets including irregularly spaced repeated measures.

In personality and psychopathology research, it is relatively common to collect data on different groups of individuals (e.g., patients vs. controls, males and females, individuals assigned to different experimental conditions etc.). The patterns of similarities and differences among these groups are often particularly interesting. If one estimates a single network across groups (e.g., using graphical lasso; Friedman, Hastie, & Tibshirani, 2008), one completely loses track of inter-group differences. Conversely, if one estimates a separate network independently for each group, one does not exploit inter-group similarities to improve estimates. Furthermore, one cannot be sure whether the differences among the estimated networks reflect genuine differences or just small sampling fluctuations. We propose to jointly estimate networks in different groups using the Fused Graphical Lasso method (FGL; Danaher, Wang, & Witten, 2014), an extension of the graphical lasso algorithm that includes a lasso regularization on the differences of the parameters across groups. The FGL jointly estimates different networks across groups of individuals, by exploiting their similarities without masking their differences1.

In the case of irregularly spaced repeated measures, temporal networks (which encode cross-lagged relationships among variables; Bringmann et al., 2013) cannot be easily estimated. This is the case of event-contingent Ecological Momentary Assessment (EMA) data, in which the presentation of a questionnaire is connected to an event and not to a specific timing. This data-collection strategy typically results in participants filling the questionnaire in different moments and a different number of times. As discussed by Epskamp and colleagues (2017), repeated measures can be used not only to estimate temporal networks, but also contemporaneous and between-subject networks. Contemporaneous networks encode relationships among variables at the same timepoint, whereas between-subject networks encode involve stable differences among individuals. These types of networks can be both estimated even on irregularly-spaced repeated-measures data. Furthermore, one can use FGL to compute different between-subject networks and contemporaneous networks for each group. 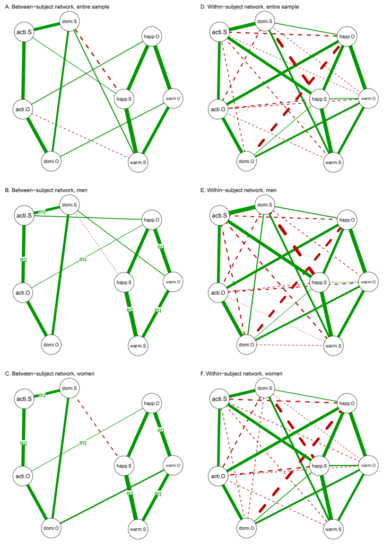 For our tutorial, we consider a dataset in which male and female participants filled in a questionnaire every time they experienced a significant social interaction (event-contingent EMA) and rated their behavior and emotions experienced during the interaction, as well as those of the other individual. We use package qgraph (Epskamp, Cramer, Waldorp, Schmittmann, & Borsboom, 2012) and a newly developed package that implements FGL, EstimateGroupNetwork (Costantini & Epskamp, 2017), to estimate between-subject and contemporaneous networks. We also discuss how such networks can be interpreted and what they can reveal about personality and psychopathology dynamics.