This guest post was written by Aaron Fisher (afisher@berkeley.edu) who is an Assistant Professor of Psychology and the Director of the Idiographic Dynamics Lab at the University of California, Berkeley. Aaron argues for a shift from nomothetic to idiographic research, and describes a new dataset he made publicly available for researchers to use that includes complete multivariate time-series for 40 participants.

As readers of this blog are likely aware, network analysis represents a new and exciting paradigm that holds the potential to better delineate the structure and dynamic organization of psychopathology. However, as I’ve written about elsewhere, the symptomatology of common psychiatric disorders is composed of time-varying phenomena, occurring within individuals. This presents sizable challenges to research generally, and network analysis specifically. Quite simply, time-varying phenomena can only be effectively observed through time-varying data collection and within-individual (i.e. idiographic) processes can only be uncovered via idiographic research methodologies. Peter Molenaar has written on these issues extensively and I encourage everyone to read his manifesto on idiographic science. To summarize his position, inter-individual variation and intra-individual variation are inherently unrelated, an assertion that Molenaar supports through mathematical proof. As a consequence, he argues, the burden of proof should fall on researchers to demonstrate that the nomothetic and idiographic are at least consonant – if not identical – if we want to generalize the former to the latter. Phenomena for which inter- and intra-individual processes (e.g. variance-covariance) are equivalent are known as ergodic. If a given statistical relationship exhibits the same relative strength and direction across both idiographic and nomothetic paradigms, then conclusions from one can be extrapolated to the other. However, Molenaar has argued that most psychological processes are unlikely to be ergodic. In fact, James Boswell and I found evidence that the well-known (and widely-replicated) positive correlation between depression and anxiety is not reliably reproduced within individuals, and may even exhibit a negative relationship over time (see Fisher & Boswell, 2016).

Thus, at the risk of denigrating or minimizing the groundbreaking, paradigm-shifting, and altogether important work that has been published in the past several years on cross-sectional and/or nomothetic data, I would argue that researchers should endeavor to collect intensive repeated measures data in order to conduct idiographic time series analyses of pathologic phenomena. While our cross-sectional and nomothetic work may help to establish new methods, develop rationales, stimulate hypothesis generation, and foment interest, we must be careful about the degree to which we use nomothetic research to understand the phenomenology and behavior of individuals. Ambulatory and ecological momentary assessments can be readily employed to collect hundreds of observations of thoughts, feelings, and actions, which can then be leveraged to produce multivariate time series for dynamic, intraindividual analysis.

Over the past three years, my lab has collected such data. In the course of conducting an open trial for a personalized, modular cognitive-behavioral therapy (see Fisher & Boswell, 2016 for more details), we have interviewed and enrolled 40 individuals with primary, DSM-based generalized anxiety disorder (GAD) and/or major depressive disorder (MDD). Prior to therapy, participants complete an intensive repeated measures paradigm in which they report their momentary experience of 21 items related to mood and anxiety psychopathology (such as avoidance behavior, positive and negative affect, anhedonia, depressed mood, worry, etc.). Surveys are completed 4x/day for approximately 30 days. To date, the average number of completed surveys has been 130.43 (SD = 19.27), with a range from 87 to 212.

Recently, we have developed a method for leveraging both structural equation modeling (SEM) and network analytic methodologies in order to analyze contemporaneous and time-lagged relationships in intraindividual mood and anxiety syndromes. This work is currently under review, however the revised manuscript and supporting documents can be found on the Open Science Framework at https://osf.io/zefbc/. While responding to reviewer feedback, it became apparent that the best way to present our methods and results – to maximize transparency, clarity, and technical explication – was to share the raw data alongside the code for data preparation and analysis. Thus, at the OSF location noted above, readers can find the complete multivariate time series for the 40 participants reported in the manuscript under review. In addition, readers will find the revised manuscript and step-by-step instructions for carrying out the analyses described in the manuscript. Participant data such as age, sex, ethnicity, and diagnosis can be found in Table 1. 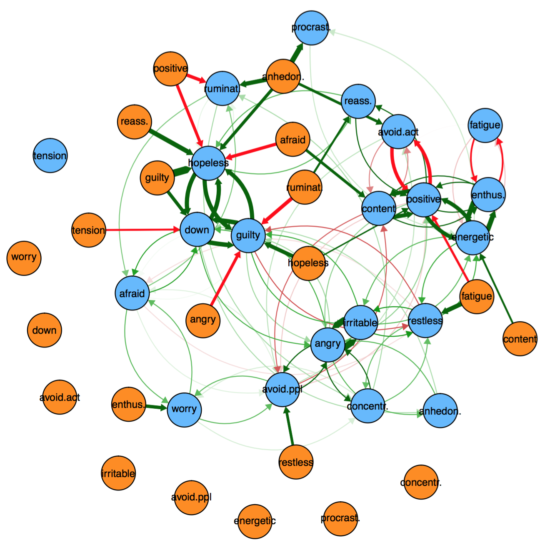 To our knowledge this is the largest and most detailed data set of its kind and I am sincerely excited to share it with interested parties. As an advocate for idiographic science, I believe that seeing is believing. Therefore, it is my hope that working with these data will help to illuminate the necessity and potential impact of idiographic work. Our lab welcomes any and all potential collaborators. Feel free to contact me at afisher@berkeley.edu with any queries or comments. For those interested in working with these data, please note that there are currently two manuscripts in preparation: One on the idiographic factor structure (p-technique) of each time series and another examining the predictability of nodes in both contemporaneous and time-lagged networks. As other projects develop, we will endeavor to update this post.