A new paper by Mohammad Afzali and colleagues was published a few days ago in the Journal of Affective Disorders, entitled “A Network Approach to the Comorbidity between Posttraumatic Stress Disorder and Major Depressive Disorder: the Role of Overlapping Symptoms”.

The authors estimate the network structure of 36 symptoms in 909 participants, and, as common in the literature, report (1) especially strong edges, (2) especially central symptoms, and (3) bridge symptoms that connect PTSD and MDD symptoms. In terms of sample size and power, this is a typical paper, and also similar to many of the papers presented at the ABCT conference last weekend that you can find here.

I want to use this paper as an opportunity to talk about power issues in network modeling, and show you how to estimate the robustness / accuracy / stability of the networks you obtain. I believe there is a real danger of an upcoming replicability crisis consistent with the rest of psychology, given that we are using highly data-driven network models,; below are some things you can do to look at your results in more detail.

This blog is a brief non-technical summary of a paper on robustness and replicability that is currently under revision at Behavioral Research Methods entitled “Estimating Psychological Networks and their Accuracy: A Tutorial Paper”.

Imagine we know the true network structure of a network with 8 nodes, and it looks like this (left side network, right side centrality values). All edges are equally strong, and that means that all centrality estimates are also equally strong. 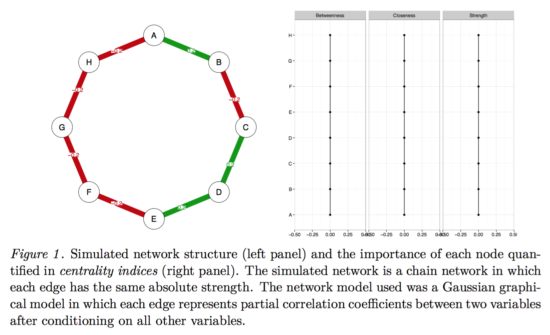 And now imagine we take this true network, and simulate data from it for n=500. This gives us a dataset with 8 variables and 500 people, and now we estimate the network structure in this dataset, along with the centrality values. 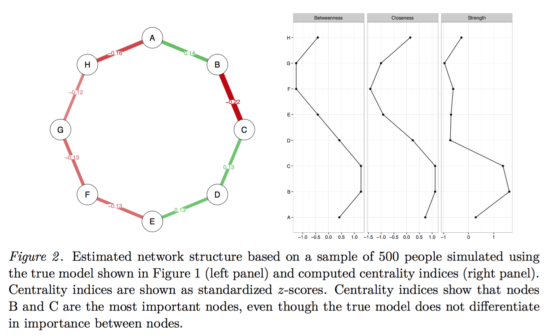 The issue is more pronounced with (a) fewer participants, (b) more nodes, or (c) both. The reason for this is that the current state-of-the-art network models we use in cross-sectional data, regularized partial correlation networks, require a very large amount of parameters to estimate.

I will to introduce two methods briefly that allow you to get to the bottom of this problem in your data.

First, we want to look into the question how accurate we estimate edge weights of a network. For this purpose, we take a freely available dataset (N=359), and estimate a regularized partial correlation network in 17 PTSD symptoms, which looks like this:

Using a single line of code in our new R-package bootnet to estimate edge-weights accuracy, you can now estimate the accuracy of the edge weights in the network, leading to the following plot: 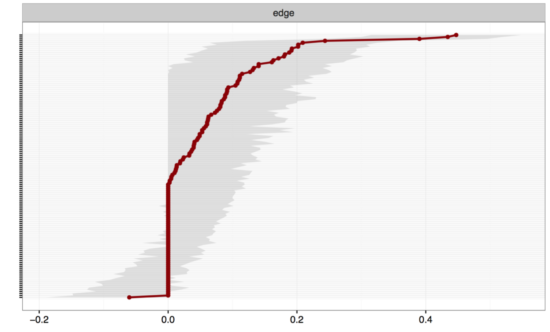 On the y-axis you have all edges in the network (I omitted the labels of all edges here, otherwise the graph gets very convoluted), ordered from the highest edge (top) to the lowest edge (bottom). Red dots are the edge weights of the network, and the grey area indicates the 95% CI around the edge weights. The more power you have to estimate the network (the fewer nodes / the more participants), the more reliable your edges will be estimated, the smaller the CIs around your edges will be. In our case, the CIs of most edges overlap, which means that the visualization of our network above is quite misleading! While certain edges look stronger than some weaker edges, they are actually not different from each other because their 95% CIs overlap. It’s a bit like having a group of people with a weight of 70kg (CI 65-76kg), and another group with 75kg (CI 70-80kg): these 2 point estimates do not differ from each other because their 95% CIs overlap. In sum, with 17 nodes we would prefer to have many more participants than the 359 we have here.

If we now want to look whether specific edges are different from each other, we can run the edge-weights different test in bootnet: 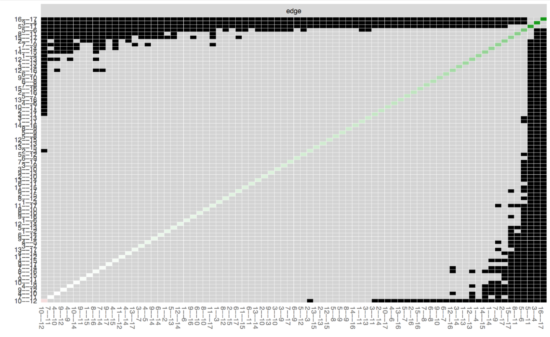 Here you can see all edges on both x-axis and y-xis, and in the diagonal the value of the edge weights; black boxes indicate significant difference between 2 edges. After looking at the substantial overlap of CIs above, it is not surprising that most edges do not differ from each other. (Note that this test does not control for multiple testing; more about this in the manuscript).

The second big question we can try to answer is the stability of centrality. Let’s look at the centrality estimates of our network first, and focus on strength centrality, which is the absolute sum of edges that connect a given node to other nodes. 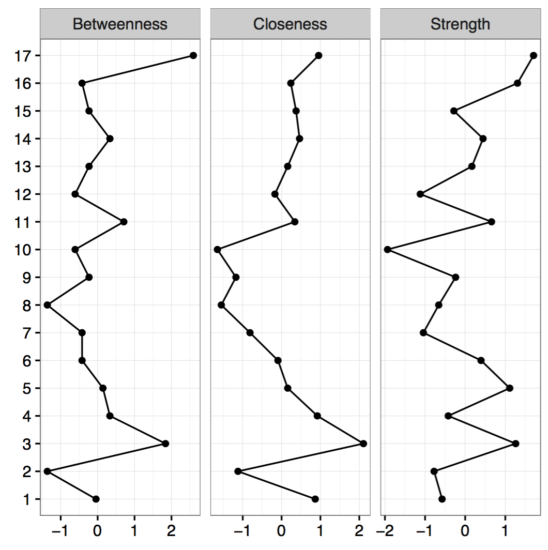 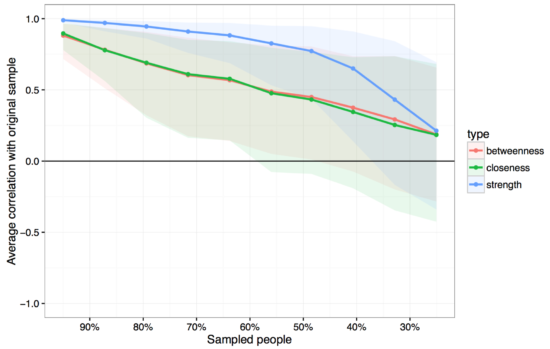 You see that strength centrality (blue) is more stable than betweenness or closeness, which is what we have often found when using bootnet in numerous datasets now. In our case, the correlation between the order of strength centrality in our full dataset with a dataset in which we (2000 times) sampled 50% of the participants is above .75, which isn’t too bad. In the paper, we introduce a centrality stability coefficient which tells you more about the stability of your centrality estimates.

Finally, you can also check whether centrality estimates differ from each other, using the centrality difference test; node 17 is not more central than node 16. (Similar to the edge-weights difference test, this test does not control for multiple testing.) 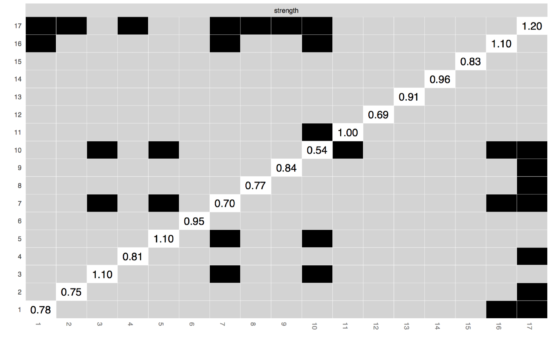 Background. The role of symptom overlap between major depressive disorder and posttraumatic stress disorder in comorbidity between two disorders is unclear. The current study applied network analysis to map the structure of symptom associations between these disorders.
Methods. Data comes from a sample of 909 Australian adults with a lifetime history of trauma and depressive symptoms. Data analysis consisted of the construction of two comorbidity networks of PTSD/MDD with and without overlapping symptoms, identification of the bridging symptoms, and computation of the centrality measures.
Results. The prominent bridging role of four overlapping symptoms (i.e., sleep problems, irritability, concentration problems, and loss of interest) and five non-overlapping symptoms (i.e., feeling sad, feelings of guilt, psychomotor retardation, foreshortened future, and experiencing flashbacks) is highlighted.
Limitations. The current study uses DSM-IV criteria for PTSD and does not take into consideration significant changes made to PTSD criteria in DSM-5. Moreover, due to cross-sectional nature of the data, network estimates do not provide information on whether a symptom actively triggers other symptoms or whether a symptom mostly is triggered by other symptoms.
Conclusion. The results support the role of dysphoria-related symptoms in PTSD/MDD comorbidity. Moreover, Identification of central symptoms and bridge symptoms will provide useful targets for interventions that seek to intervene early in the development of comorbidity.

The usage of psychological networks that conceptualize psychological behavior as a complex interplay of psychological and other components has gained increasing popularity in various fields of psychology. While prior publications have tackled the topics of estimating and interpreting such networks, little work has been conducted to check how accurate (i.e., prone to sampling variation) networks are estimated, and how stable (i.e., interpretation remains similar with less observations) inferences from the network structure (such as centrality indices) are. In this tutorial paper, we aim to introduce the reader to this field and tackle the problem of accuracy under sampling variation. We first introduce the current state-of-the-art of network estimation. Second, we provide a rationale why researchers should investigate the accuracy of psychological networks. Third, we describe how bootstrap routines can be used to (A) assess the accuracy of estimated network connections, (B) investigate the stability of centrality indices, and (C) test whether network connections and centrality estimates for different variables differ from each other. We introduce two novel statistical methods: for (B) the correlation stability coefficient, and for (C) the bootstrapped difference test for edge-weights and centrality indices. We conducted and present simulation studies to assess the performance of both methods. Finally, we developed the free R-package bootnet that allows for estimating psychological networks in a generalized framework in addition to the proposed bootstrap methods. We showcase bootnet in a tutorial, accompanied by R syntax, in which we analyze a dataset of 359 women with posttraumatic stress disorder available online.